My heart weeps for a Connecticut theater destroyed by fire recently. https://www.nytimes.com/2019/01/13/arts/stratford-shakespeare-theater-fire.html

I grew up attending performances at the American Shakespeare Festival Theater in Stratford, CT. My mother took my sister and me to its shows, mostly Shakespeare plays; it’s where my love for the bard was born.

At the time, I didn’t appreciate the names of the actors I saw: Katherine Hepburn, James Earl Jones, and Morris Carnovsky. We’d picnic on the lawn overlooking the shoreline and loved the building itself, modeled after the Globe in England.

I played the Wall in the Pyramus & Thisbe scene in Act V of Midsummer’s Night Dream at a local summer camp. Decades later, as a middle school teacher, I taught the same play and directed student productions.

When my then boyfriend first met my family, my mother took us to a performance of Othello. Maybe not the best play for romance, but it began our Shakespeare journey together. Living in London from 1982-1987, we attended as many Royal Shakespeare Company shows as we could. Returning to the US, we were (and continue to be) delighted to find the Shakespeare Theater of NJ 20 minutes from our house.

As yet, no cause of the fire has emerged. Arson? I hope not.

Let’s treasure our art spaces; it’s what makes us human. 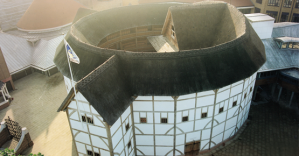 The Globe in London