Posted on September 28, 2016 by lisakwinkler

I visited my mentor, Dr. M. Jerry Weiss this week. At 90, he’s as sharp as ever and we discuss everything from family to politics and of course, children’s literature. He gave me a batch of books when I left. Publishers continue to send him new titles- his basement is lined with bookshelves and he seems to know where everything is.

Here’s what I got:

Curious George Visits the Dentist by Monica Perez, Illustrated by Mary O’Keefe Young (Houghton Mifflin Harcourt)  Who can resist this adorable monkey who seems to get himself in and out of trouble? A nice way to ease a young child’s fears of the dentist, illustrated  with a multi-racial cast of characters. The Curious George industry has continued beyond the original writer and illustrator team of Margret & H. A. Rey, keeping the famous monkey alive for the ages.

Lotus & Feather by Ji-li Jiang, illustrated by Julie Downing (Disney/Hyperion)Lotus rescues an injured crane who she names Feather. When Feather heals, Lotus sends him back to his migrating flock. One day, Feather returns with his family in tow. Based on true events, the story inspires empathy.

Henri’s Scissors written & illustrated by Jeanette Winter (Beach Lane Books)In sparse prose, Winter brings readers into the world of artist Henri Matisse, starting as a young child drawing through old age when ill in bed and no longer able to paint, he began creating collages with paper cut-outs. Have scissors and paper handy for young readers to create their own!

Old MacDonald Had A Truck by Steve Goetz, illustrated by Eda Kaban (Chronicle Books)  And a front loader, a bulldozer, a dump truck and so on. The classic retold for the construction vehicle- loving crowd. Lots of fun sounds to act out too.

Monkey: Not Ready for the Baby by Marc Brown (Alfred A. Knopf)Monkey likes being the little brother but is thrilled when his baby sister arrives. There can never be enough books to prepare older siblings for the arrival of a new baby.

Planet Kindergarten: 100 Days in Orbit by Sue-Ganz-Schmitt, illustrated by Shane Prigmore (Chronicle Kids)  The first 100 days of kindergarten set in outer space, including walking with a buddy and helping clean up alien toys. Onto day 101!

Platypus by Sue Whiting, illustrated by Mark Jackson (Candlewick Press) Learn about the mysterious platypus through both a lyrical narration of a platypus’ day and the scientific facts about the animal, combined in two different fonts on each page.

And finally a little self-promotion. I’ve self-published two books recently. Both have been long in the writing and have been vetted through children’s book writing workshops. I just wanted to get them out there this year!

Amanda at Bat is based on true events. Amanda is so excited to play t-ball but she never gets her turn at bat until she creatively suggests ways to change the batting order. I added a few questions at the end to discuss Amanda’s actions and the issue of fairness with young readers and listeners. 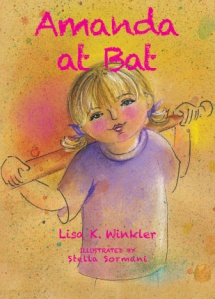 Clara & Her Nutcracker stems from an early love of the famous ballet and its music. I can’t remember when I started writing this beloved story in verse but kept at it for more than a decade.

Please check them out and let me know what you think!

Tiny minuscule writing in little books. Wonder how publisher type setter managed unless told to copy over, curious how much editing was involved

Jane eyre always one of my favorites, gift from welsch pen pal when about 11..

Still have and have watched sereral variations of the movie.. still love original w/ orson wells and joan fontaine (and a very young Elizabeth taylor the best

Feminist—no man or woman, author.. is our reading biased by gender of author?