Summer’s nearly over. Here’s a few titles to carry you through Labor Day.

Princess Bride fans take note. Cary Elwes, the actor who played Wesley, has written a memoir about the making of the 1987 movie, based on the 1973 book by William Goldman. As You Wish: Inconceivable Tales from the Making of The Princess Bride gives a behind-the-scenes glimpse into the world of movie making. You read how the film was cast and produced, and of the obstacles, like unpredictable British weather and actor injuries. You learn how director Rob Reiner had to leave the set to stifle his laughter when Billy Crystal, playing Miracle Max, added so many lines to the script he left everyone in hysterics. Reading the memoir reminded me how charming the book and movie are and how I need to reread and rewatch.

Five hundred plus pages fly by in Anthony Doerr’s All the Light We Cannot See, the well-deserved 2015 Pulitzer winning World War II novel. We meet a blind French girl, Marie-Laure and an orphaned German boy, Werner whose lives ultimately intertwine on the remote French coast of Saint-Malo. Told in short chapters, alternating from one character to the other, the novel is compelling . 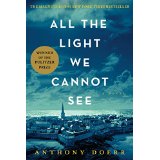 I’ve always been an Alice Hoffman fan since way back and enjoy her more recent fiction, especially  The Dovekeepers. In The Marriage of Opposites she brings us to the tropical island of St. Thomas in the early 1800’s where Rachel, the future mother of Impressionist artist Camille Pissaro, defies her synagogue and society to marry Frederick Pizzaro, a family business associate. Set at a time when slavery existed and people didn’t cross racial barriers, the novel shows how this family (based on fact), managed to thrive and maintain friendships.

Happy to have some book suggestions!